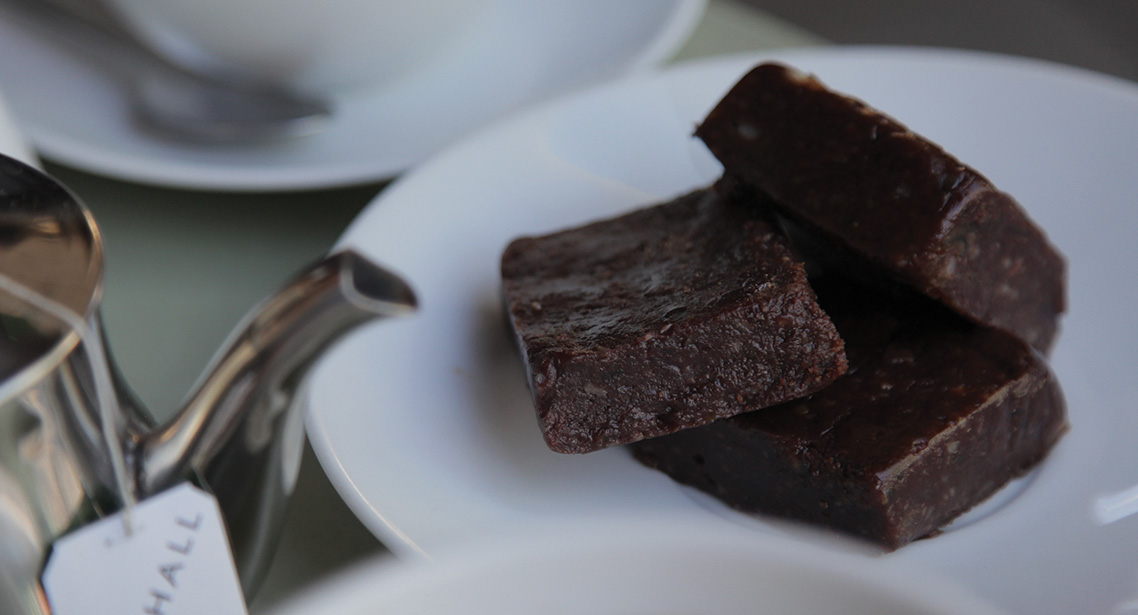 It was the promise of raw chocolate brownies that did it….

For those wanting to make healthy lifestyle changes, exercise and diet are a great place to start. There’s often the perception that healthy food is boring, tasteless and tricky to prepare, which is why I have run yoga & raw food workshops to give people an insight into how quick, easy and delicious healthy food can be. Introducing raw food dishes into your diet is a great way of eliminating processed foods, refined sugar and gluten, which can help with weight loss, increased energy levels and detoxing.

Alison Jones came to one of my yoga & raw food workshops a few months ago and wrote about her experience for the Bramley Magazine. Renowned for her running skills but a newbie to yoga, it was great to hear her take on the workshop, so I thought I’d share it with you:

“It was the promise of raw chocolate brownies that did it. I can’t say no to a chocolate brownie of any description, and so I found myself one sunny Saturday morning in Cross House, bending my unbendy body into new and unexpected shapes. Yoga instructor Felicity Wood has been running classes on Thursday evenings in Bramley for a few months now and this was her first half-day workshop, a three-hour yoga and raw food cookery experience.

I’ve always liked the idea of yoga but have never done a class before (I don’t think the Wii Fit counts, really) so was a little nervous, especially as the only mats left when I arrived were right at the front. But the 75-minute session was wonderful: gentle yet hard work at the same time, somehow, and I could feel the tension in my computer-bound neck and shoulders melting away as I focused on breathing and awareness of my body. There was a wide range of abilities in the room, but Felicity’s suggestions allowed everyone to modify each pose to just the right intensity. The session ended with relaxation (I was very jealous of the old hands who’d brought blankets to snuggle under), and the sensation of physical and mental calmness was extraordinary.

Then it was on to the second part of the workshop. While we enjoyed a Positivitea tea-tasting session (my personal favourite was rooibos, cocoa and vanilla), Felicity whipped up some spicy guacamole which she served with home-made flax-seed bars and sweet pepper crudités. It was just-can’t-stop-eating-it good, but then guacamole is one of my favourite things in the universe. I was more dubious about the main course – raw courgette ‘pasta’ with tomatoes and avocado pesto. But the first taste convinced me: fresh, vibrant, moreish and absolutely delicious. I was almost too full for dessert, those raw chocolate – well, actually cacao – brownies I’d been looking forward to all morning, but I managed to force one down. And then another. They were incredible: squidgy, sweet, indulgent and completely sugar-free. 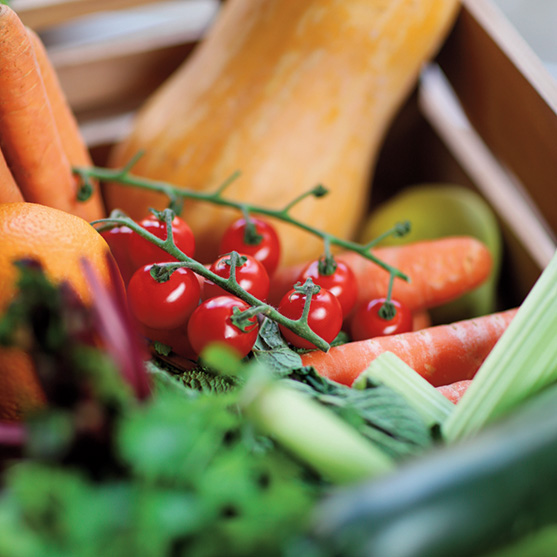 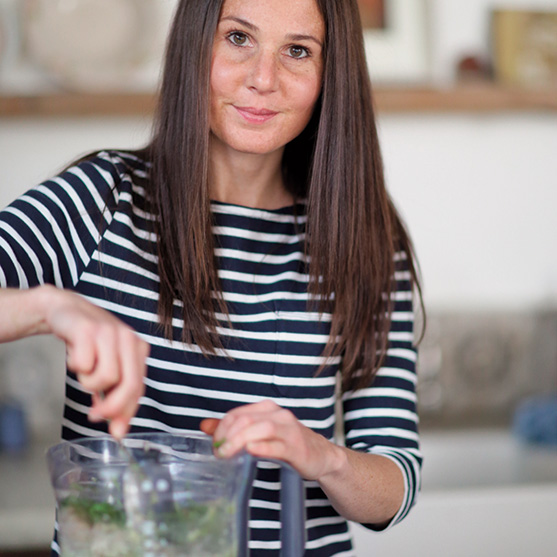 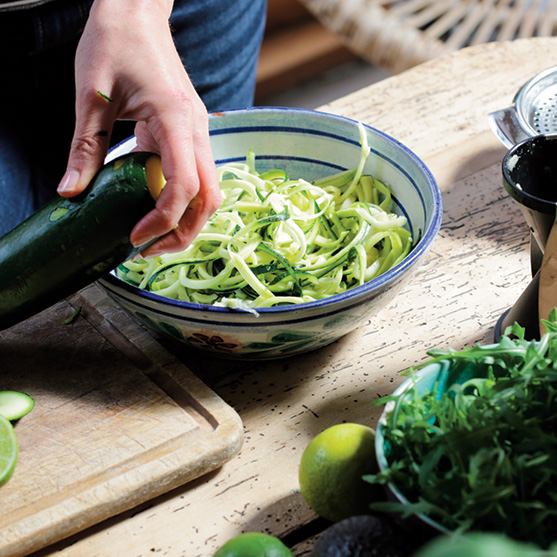 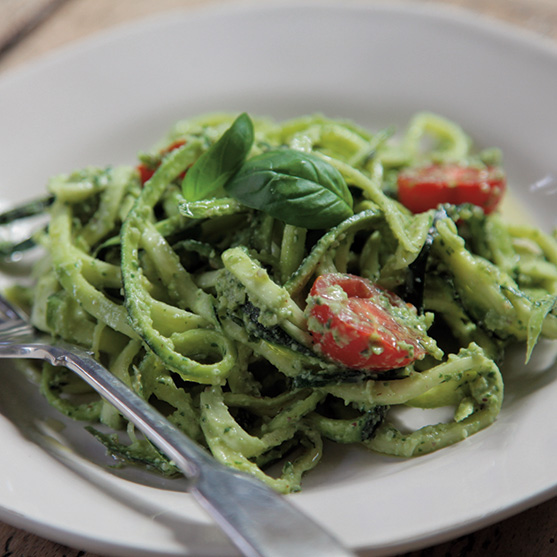 I asked a few of the others at the workshop what had brought them along (apart from the lure of brownies). Most had already attended Felicity’s Thursday night classes and jumped at the opportunity of an extended session. ‘I love yoga, it makes me feel calm, but also like I’ve really exercised,’ Kelly told me. Hilary agreed: ‘Some exercises classes I really enjoy and I leave feeling pumped, but after yoga I feel so calm, and I always sleep better.’

Lisa, a cancer nurse, told me how much she enjoys the company as well as the yoga itself. ‘Cross House is a lovely venue,’ she said, ‘and I find that people who like yoga tend to be open-minded and friendly, it’s not at all cliquey.’ I mentioned this to Felicity, who agreed whole-heartedly. ‘Yoga tends to appeal to people who want to get more out of life generally. Even though the classes have only been going since February it already feels like a community.’

As Felicity explained, there’s a new level of awareness at the moment about the importance of nutrition alongside exercise (she’s right of course, once Davina McCall’s published a book on going sugar-free you know it’s hit the mainstream), but many people just don’t know where to start, or think that eating healthily is a complicated, joyless business. She’s found that yoga makes people more aware of their bodies, and kinder to themselves generally, which includes the food they choose to eat, and wanted to show in this workshop that healthy eating can be simple and delicious.

Neil, a self-confessed exercise junkie, summed it up well: ‘I like it because it’s gentle moves yet strenuous exercise at the same time, and I always feel taller after a session. And whereas I usually eat junk after exercising, after yoga I want to buy healthy stuff.’

I came away feeling great, and with a new perspective on food (not to mention a very generous goody bag to get me started on my new healthy eating regime).”

Written by Alison Jones for The Bramley Magazine, July 2015

Our website uses cookiesACCEPTREFUSEREAD MORE
You can revoke your consent any time using the Revoke consent button.Revoke consent