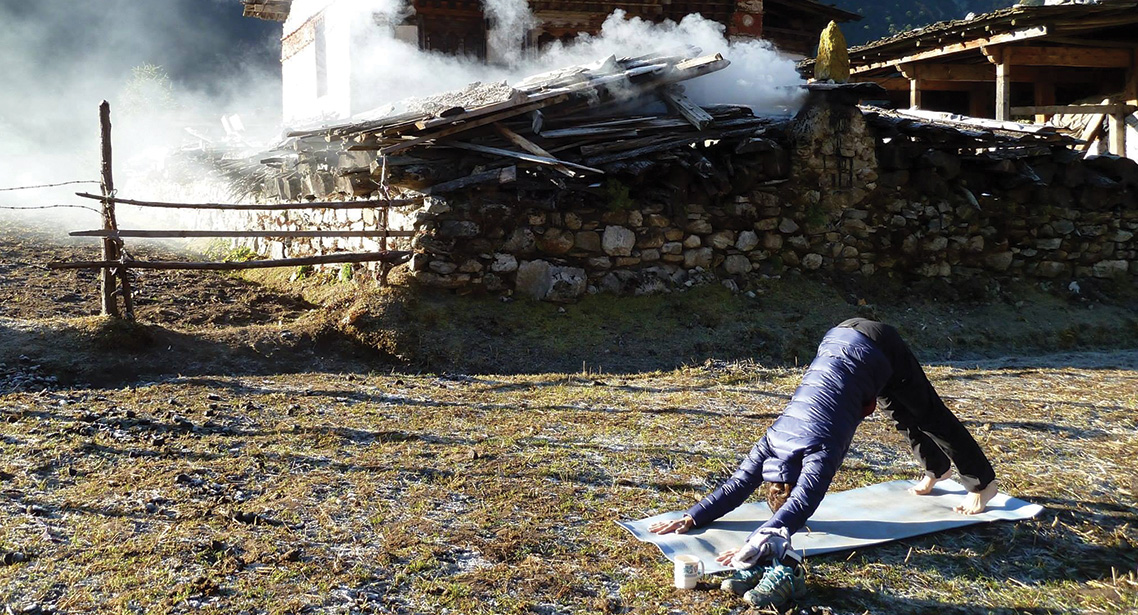 Yoga in the Mountains

After I quit my career in marketing, I ditched my laptop and high heels and went travelling for six months. Feeling liberated and in gleeful anticipation of all the wonders that I would see, people I would meet and things that I would do, I set off with my yoga mat strapped to my 85 litre backpack.

I’d done a lot of travelling in the past; a year of backpacking through Central and South America as part of my languages degree, cycling in Vietnam and China, adventure racing in Borneo, hiking in Iceland and road tripping and climbing mountains in Southern Africa. But it had always been my dream to go one day to Nepal to trek to Everest Base Camp, and to the home of yoga: India.

I started off in Canada; hiking and canoeing in the Yukon, hiking in the Rockies and indulging in twice-daily yoga classes and fresh seafood in Vancouver. Then I flew to the East of the USA and spent a week camping and hiking amongst the gorgeous colours of the ‘Fall’ in New Hampshire, Maine and Vermont. It was chilly camping there, so I started to look for alternative places to do my yoga practice, the most memorable being a cosy laundrette where I practiced whilst watching my clothes tumble around in the dryer. After the USA, I flew to the warmth of Morocco for a week of yoga on the beach with one of my most loved teachers.

And then….to the East. Up until then, my trip had felt like an extended holiday – hiking, yoga and canoeing interspersed with eating a lot of seafood. Culturally it wasn’t too distinct from being in the UK. But stepping off a small plane in Bhutan I suddenly felt a million miles away. The Bhutanese boarders have only been open to tourists since 1974 and even today there are strict entry regulations – you can only enter as a member of an established tour group, you have to pay a fixed tourist tax and the number of visitors is limited every year. This means that the country’s culture, countryside and heritage have been beautifully preserved. Said to be ranked the happiest country in Asia, Bhutan has a Gross National Happiness Index to monitor the peace and happiness of its people. Approximately 75% of the Bhutanese practice Buddhism and about 25% practice Indian- and Nepalese-influenced Hinduism, and during my two week trek through the Bhutanese Himalaya I was fascinated to learn of their Buddhist beliefs. Trekking through remote untouched villages and stunning mountainous scenery, I came across prayer wheels, monasteries (dzongs) and prayer flags whilst listening to our guides chant mantras and share stories about their deities. We slept in tents next to herds of yaks and ponies, sometimes in small villages, sometimes out in the wilderness. Each morning I would wake early, sometimes before the sun appeared from behind the mountains and practice yoga next to my tent. It was often so cold that I’d be in every layer possible, until the sun started to warm the earth. It was stunning and such a privilege to practice surrounded by such magnificent beauty. The crew thought I was absolutely bonkers though. I don’t think they’d ever seen a westerner practice yoga before, let alone whilst camping in sub-zero temperatures! They always brought me a bowl of hot water and a mug of green tea afterwards to warm my hands and feet.

From Bhutan, I then went to Nepal, and embarked on a trek to Everest Base Camp. Unfortunately I managed to pick up a stomach bug in Kathmandu, which didn’t manifest itself until I was on the small plane to Lukla, where the trek starts. I spent the first three days of the trek in a very bad state! I don’t know how I managed to drag myself through the mountainous valleys; I spent most of the time darting into toilets or bushes along the way. But after a few days I recovered and was back on form. The trek to Base Camp was epic. As with Bhutan, the Nepalese culture combines Buddhism and Hinduism and so this trek was another opportunity to learn about the culture and heritage of the country I was exploring. We trekked through beautiful colourful villages, hiked up peaks beyond 5000m in elevation and stayed in tea houses along the way. Despite it being freezing in our rooms (the liquid in my contact lens containers often froze), the luxury of staying in tea houses compared to a tent meant that I could practice yoga every morning and evening next to the wood burner which would normally be in the centre of the main communal room. I would get up super early, sometimes before the house owners, sneak out of my room so not to disturb my roommate and practice in my down jacket until I started to warm up. As you can imagine, I got many strange looks; from the Nepalese locals and trekkers alike. But it was wonderful to be able to continue my practice, even at 5000m! There’s something so special, and humbling, about practicing facing a backdrop of the world’s tallest mountain.

After reaching Everest Base Camp and travelling back to Kathmandu, it was then time for the final part of my adventure: India. The thing that made me feel instantly at home was an ad board in the airport saying: ‘The Gift of Wellbeing to the World. Yoga, which originated in India almost 5000 years ago, is India’s gift to the world’. I had arrived.

After touching down in the crazy-busyness of Delhi, I first spent two weeks exploring Rajasthan – taking in the sites of the Taj Mahal, the bustling streets of Jaipur and the white marble palaces of Udaipur. I ate A LOT of curry. And I spoke to a lot of people. Something that struck me was that yoga is a fundamental part of people’s lives over there – everyone knows and respects it as a practice – but not in the western sense. In India, meditation and pranayama are at the forefront. The asana – the physical postures that we in the west associate with yoga – has nowhere near as much importance. 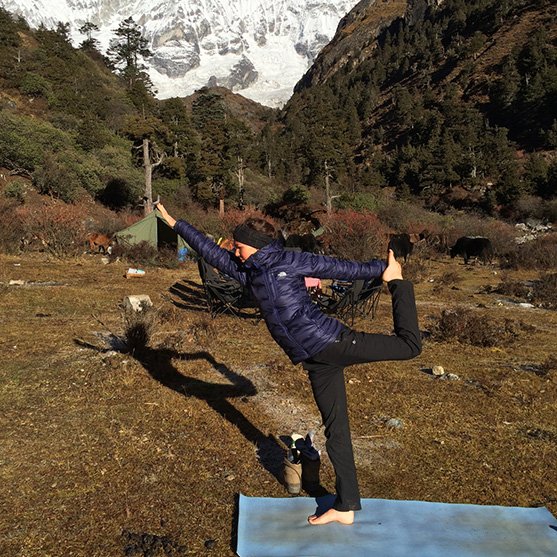 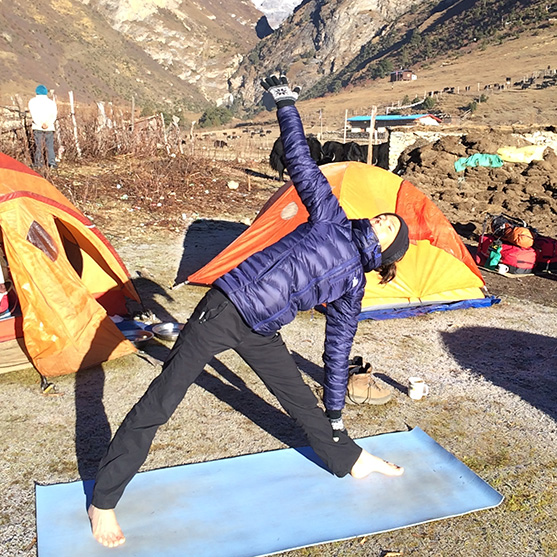 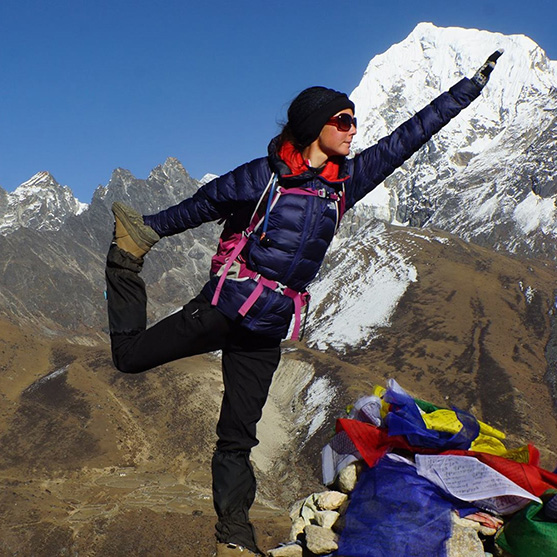 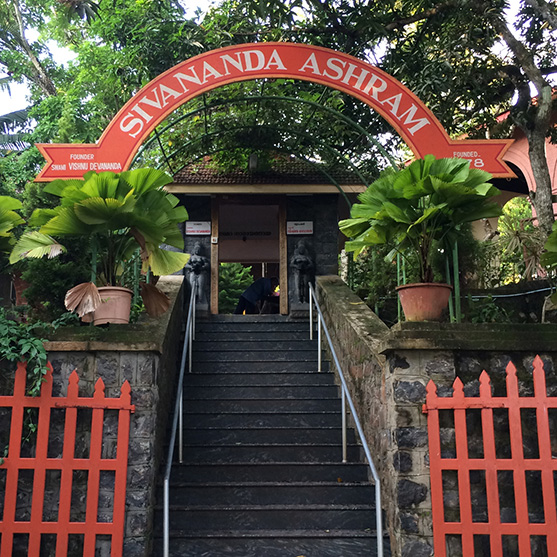 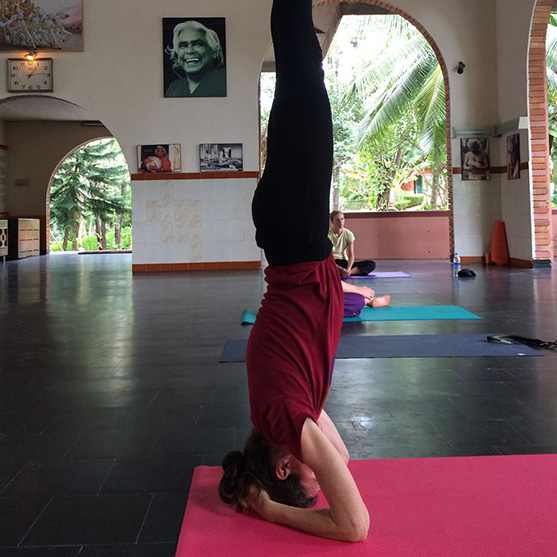 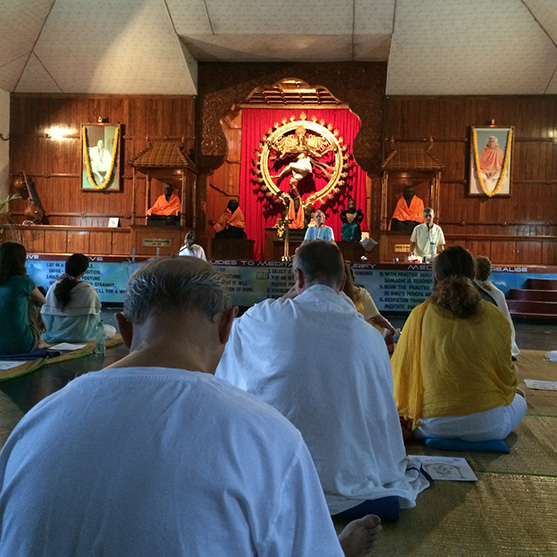 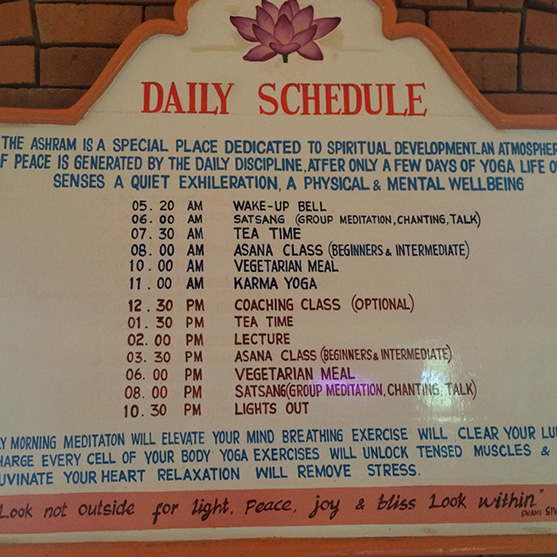 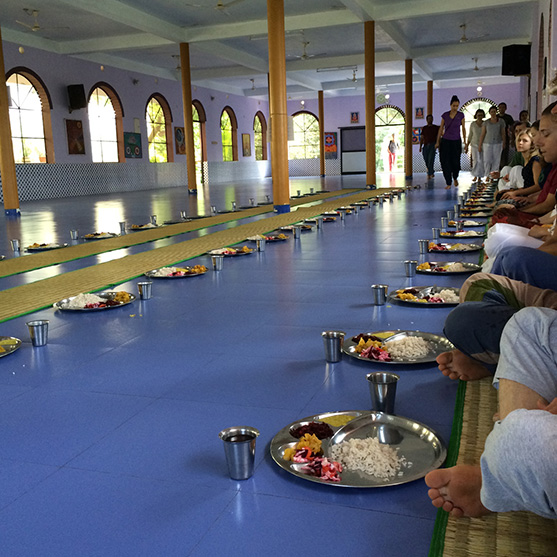 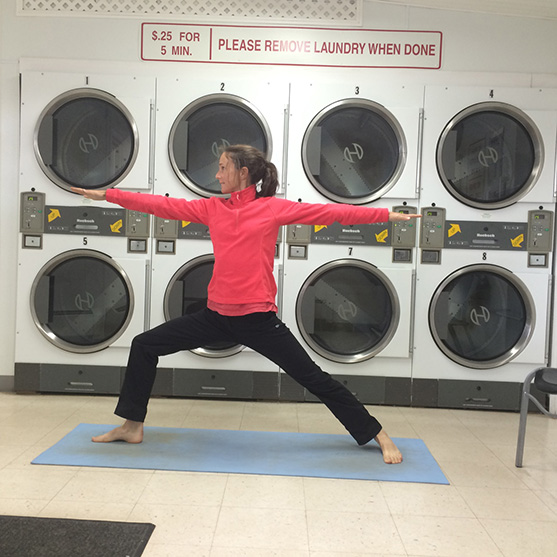 After exploring the north, I then flew down to Kerala and was delighted to be by the water again, eating fresh seafood and coconut milk-based curry. I went on a mini road trip to see the tree plantations in Munnar and spent a night on a houseboat from Alleppey. That night I made the mistake of practicing yoga on the top floor of the boat at dusk and got eaten alive by mosquitos.

After my mini Keralan adventure, it was time for my final and most anticipated stage of my journey: my stay at the ashram. I spent two blissfully peaceful weeks at the Sivananda Yoga Vendanta Centre in Trivandrum. There was a comfortingly rigid structure to the day, which I happily embraced. My day would start at 5:20am with the wake-up bell which called us to Satsang, the group meditation and chanting session where we would sit cross-legged in rows in the main hall and chant in Sanscrit. We’d have tea after Satsang, which was divided into different kettles, catering for those who wanted it sweet or unsweetened, with or without milk. We’d have two yoga classes a day, led by a mix of Indian and foreign teachers who helped me enormously with my headstand practice. The Sivananda yoga practice adheres to a set sequence, sometimes with a few variations. At first I struggled mentally with the rigidity of the practice. The problem was knowing what was coming next, especially with the postures that I found challenging. But with time I started to see significant improvement in those poses and realised that the repetition of the practice perhaps was helping me to overcome my aversion to certain postures and I began to let go of the battle in my head.

Every day we had time for self-study, coaching and lectures. We were also allocated a karma yoga duty to carry out throughout our stay. Whilst some were cleaning toilets, I somehow lucked out and was given the job of working in the Health Hut making fruit salads and juices. I have never drunk so much carrot juice or eaten so much papaya! Meals were twice daily and a humbling yet uplifting experience. We’d wait outside the dining hall until we heard the staff start chanting the Hare Krishna mantra, and then we’d all take our shoes off, file in and wash our hands, whist joining in with the chant. Sitting down with crossed legs on the floor in rows, the delicious vegetarian food would be dished up from buckets into our trays, which were divided into sections, school dinner style. We ate with our hands in silence, often hanging around for seconds, or thirds until the buckets of chickpea curry and rice were empty and our tummies were full. The day would end with Satsang; another opportunity to chant to our heart’s content and to find a little stillness in the mind before bedtime.

There was no internet, phone signal or television; just me, my thoughts, beautiful people from around the world, and the sound of lions roaring over on the other side of the lake. I left the ashram only three times during my stay; for the morning Satsang which was held twice by the nearby lake and a third time to witness a local puja – a Hindu ceremony where 100 pots of rice pudding prasad were made and eaten. Life was simple, and I was immensely content; happy just to be. I spent quite a lot of time contemplating my future. I started to make notes, jot down thoughts, read and chatted to my American roomie about life, careers, relationships, and all the things in between.

What I did when I got back was a distant concern; I knew that I wanted to continue teaching yoga, to make it my full time career. I just didn’t know when, where or how. For those six months when I was away I completely let go; all I wanted to do was absorb the experience in its entirety, with the confidence that inspiration for my future would come and things would fall into place without me even needing to try. And that’s kind of what happened. I returned home just before Christmas, and gave myself two more weeks to catch up with friends and family. And then, on 4th January 2015, I sat at my computer and started to shape the next stage of my journey.